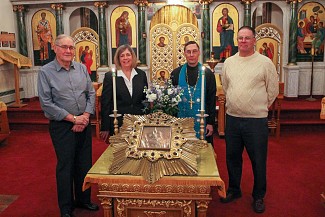 On November 16, 2019, our church of Holy Trinity held an Akathist to the Mother of God of Pochaev asking for her intercession. The service was open to Orthodox, Byzantine and Roman Catholics, Protestants and to all who wished to participate.
According to Orthodox documentation, the Pochaev Icon was gifted to a noble woman named Anna Goiskaya in 1559 by Metropolitan Neophytus of Constantinople. The Metropolitan was grateful for the accommodations provided to him, as he was tending to church business. In 1597, in the presence of the Icon, the noble woman’s brother Philip was miraculously healed from being blind since birth. The noble woman Anna recognized the Icon should be made available to all people. The Icon was given to the monks who lived at Pochaev and the noble woman, Anna, being wealthy, provided funds to build a church to house the Icon.
The monastery of Pochaev is built on the site where the Most Holy Theotokos had appeared to two monks who settled there after fleeing the Tartar attacks from the Kiev Pechersk Monastery in 1240. The monks, along with a local shepherd named Ioann Bosoi, witnessed the appearance of the Most Holy Theotokos standing on an outcrop of rock surrounded by a ring of fire. After the disappearance of the Mother of God, the three men looked upon the foot print burned into the rock where the Theotokos had stood. A spring of pure water also flowed from the site.
With this first miracle, People began to make pilgrimage to Pochaev. Due to the constant stream of the faithful visiting, the monastery and later, the Icon, became a popular destination.  Miracles continue to this very day and pilgrims of all faiths visit and venerate the Icon seeking the Theotokos’ intercessions.
Likewise, we the faithful of Holy Trinity Orthodox Church in Catasauqua have prayed before our version of the Icon for 101 years. The Icon has adorned our church and has been hanging above the Royal Doors in our church since 1918.
Understanding the living history of miracles attributed to the original Icon and its importance to our parishioners, we specifically prayed and sang before our Icon of the Theotokos’ of Pochaev. We specifically asked for intervention on behalf of our church for a revitalization of our parish. We are in our 120th year and see our church struggling to survive. Like the original congregants who filled our church with members and faith, we seek to once again fill our church. Our Akathist was very successful, our church filled with the prayers of the faithful. Our hope, our goal and our prayer to the Most Holy Theotokos is, that she draws those who are seeking a spiritual home and once again fill our church with the miracle of faithful people. 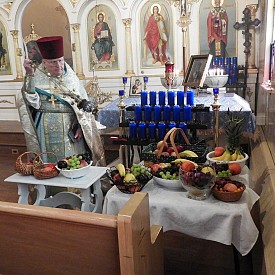 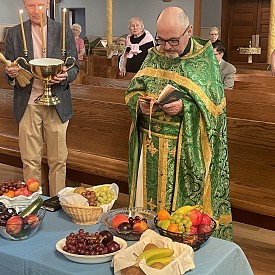