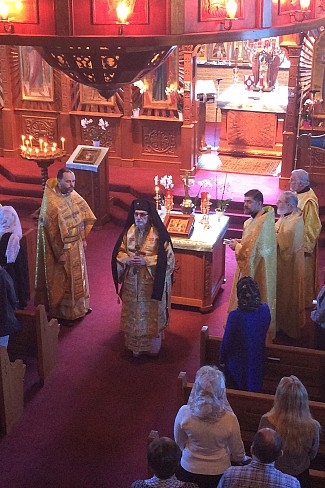 On the weekend of September 30-October 1, St. Stephen’s Orthodox Catholic Cathedral in Philadelphia celebrated its 43rd anniversary. The parish was founded by the late Fr. Alexander Fedoronko in 1971, and the first liturgy in the main church was held on August 17, 1974. Following Fr. Fedoronko’s retirement in 1981, Fr. Daniel Geeza was appointed pastor and served the parish until his retirement in June 2005. Fr. Victor Gorodenchuk became rector of the parish in July 2005.

The weekend began with Saturday evening vespers celebrated by Fr. Gorodenchuk and His Eminence, Diocesan Archbishop Mark. On Sunday morning, His Eminence was greeted by Robert Gogats, Parish Warden, and Fr. Gorodenchuk, welcoming him to his Cathedral. On most Sundays, a Slavonic liturgy is served in the Cathedral chapel by Fr. Nikolai Gulin and an English liturgy is served by Fr. Gorodenchuk in the main church. In honor of today’s anniversary, the service was combined and both congregations worshipped together. Also celebrating the liturgy were Fr. Lawrence Farley, a well-known Orthodox writer who was visiting Philadelphia, and Cathedral Deacon George Zlatkowski, a graduate of the Diaconal Formation program of St. Tikhon’s Seminary.

Following divine liturgy, parishioners gathered in the church hall for fellowship and a delicious anniversary dinner catered by a parishioner who owns several restaurants in suburban Philadelphia.

Glory to God for all things!