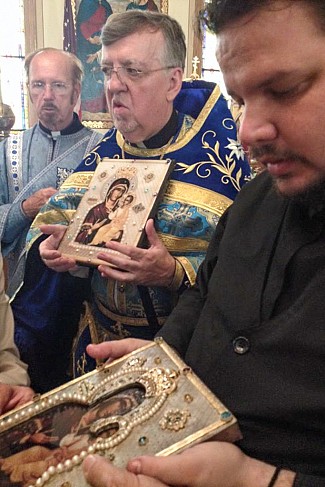 The Hawaiian Myrrh-Streaming Icon of the Iveron Mother of God visited St. Michael's Orthodox Church, Jermyn, PA, on Father's Day, June 18, 2017, for Divine Liturgy. The icon was brought from Hawaii by Subdeacon Nektarios, who gave a talk about the history of the icon and distributed small amounts of the Myrrh that had flowed during the Liturgy, assisted by Protodeacon Gabriel Petorak, Subdeacon Vasily Gardecki, and Subdeacon John Edward Lasichak. Father John Kowalczyk anointed the people after the Liturgy, and Subdeacon Nektarios presented a replica of the icon to St. Michael's.