The Holy Martyrs Agape, Irene, and Chionia were sisters who lived at the end of the third century to the beginning of the fourth century, near the Italian city of Aquilea. They were left orphaned at an early age. The young women led a pious Christian life and they turned down many offers of…

The Holy Martyr Leonidas and the Holy Martyrs Charissa, Nike (Nika, Victoria), Galina, Kalista (Kalida), Nunekhia, Basilissa, Irene, and Theodora suffered at Corinth in the year 258. They threw them into the sea, but they did not drown. Instead, they walked upon the water as if on dry land, singing…

No information available at this time.

No information available at this time.

The Ilyin-Chernigov Icon of the Mother of God was painted in the year 1658 by the iconographer Gregory Dubensky (Gennadius in monasticism). Tears flowed from the icon for eight days in 1662, from April 16-24. In this same year Tatars descended upon Chernigov and devastated it. At midnight they…

Read the Life
Tambov (Utkino) Icon of the Mother of God

In 1686, Saint Pitirim (July 28) arrived in Tambov. Along with other holy objects, he brought a copy of the Il'insk-Chernigov Icon of the Mother of God, which was considered to be the patroness of the southwest territory. Therefore, the copy was placed at the southwestern gate of the city. After a…

Read the Life
Troparion & Kontakion
The Prologue from Ohrid: April 16

All three were sisters from the vicinity of Aquileia. When Emperor Diocletian was staying in Aquileia he ordered that the distinguished spiritual father Chrysogonus be killed. At that time, an aged Presbyter Zoilus had a vision in which the location of the unburied body of Chrysogonus was revealed. Hurrying, the elder found the martyred body of Chrysogonus, placed it in a sarcophagus and kept it in his home. Thirty days later, St. Chrysogonus appeared to him and informed him that, in the course of nine days, those three maidens would suffer martyrdom and that he, too, would also die at that time. The same news was received in a vision by Anastasia, [ a woman endowed with moral and spiritual insight], who had followed the example of her teacher, Chrysogonus. Indeed, after nine days the Elder Zoilus died and those three sisters were brought to trial before the emperor. The emperor urged these three maidens to worship the idols, but they all refused and confessed their steadfast faith in Christ. Irene said to the emperor: "How stupid it is to worship things made of stone and wood, which were ordered for an agreed price and made by the hands of a mortal man." The enraged emperor cast them into prison. When the emperor departed for Macedonia, all slaves and prisoners were taken with him, among whom were these three saintly maidens. The emperor turned them over to a certain Commander Dulcitius for torturing. This commander, inflamed by dark passion, wanted to defile the virgins however, when the commander attempted to enter the prison while the virgins were praying to God he went insane. He fell among the black cauldrons and pots before the gates and began to embrace and kiss them and departed sooty and blackened. The emperor upon hearing about this incident ordered that another commander, Sisinius, take over the trial of these sisters. After prolonged torture, the judge condemned the first two sisters to death by burning and he detained Irene for a while longer hoping to defile her. But, when he sent Irene to the brothel with the soldiers, an angel of God saved this chaste virgin and staved off these soldiers and brought her to a hill. The next day, the commander with his soldiers went to this hill and were unable to ascend it. He then ordered that Irene be shot with arrows. St. Anastasia [the disciple of Chrysogonus] gathered the bodies of these three sisters into one place and honorably buried them. They all suffered honorably for Christ the King and Lord about the year 304 A.D.

2. THE HOLY MARTYR LEONIDES AND WITH HIM THE FEMALE MARTYRS: CHARIESSA, NICE, GALINA, CALLIS, NUNECHIA, BASILLISSA AND THEODORA

They were thrown into the sea but the sea received them not. They walked upon the sea as upon dry land and sang to God: "One field of battle, I ran O Lord, and the army pursued me; O Lord I did not deny You; O Lord, save my soul!" Seeing them the heathens, at first, were amazed but after that tied stones around their necks and again threw them into the depths of the sea and they drowned. They all suffered honorably for Christ the King and Lord in the year 281 A.D.

As three lilies, pure and white,

The golden chests of the Holy Spirit,

Blood, they spilled; their life they gave,

Chiona, glistens as the snow,

And Irene, the name of peace.

In torments as in the midst of a feast

And the resurrected Lord:

Most High God, whatever we have

Behold, to You, we give all:

Body, soul and all pains -

All You receive into Your hands!

From the molten fire, save the body,

From eternal wrath, save the soul!

O, thanks be to You, that You created us,

And even made us worthy of sufferings!

Martyrs, for the sake of the Trinity.

A story of the Elder Barlaam. A certain man had three friends. Two of them he loved sincerely, but with tedium, he avoided the third. It so happened that the king summoned this man before him to render account and to repay his debt. He turned for help to his first friend who rejected him and departed. He then turned to his second friend but even he did not help him. With shame, he then turned to the third friend and he joyfully accompanied him before the king. The interpretation is this: the first friend is wealth; the second friend is a relative; the third friend is the good works of men in this world ; The king is God. Who, through death, sends summons and seeks payment of debt. A dying man seeks help in his wealth, but it turns away and passes on immediately into the hands of another owner. He then turns to his relatives, but his relatives send him off alone and they remain. Then, he reminds himself of his good works, which he carried out with tedium and these immediately accompany him on the path in the presence of the King and Judge. He, who has ears to hear, let him hear. The only companions of the soul to the other world are the works of man, be they good or be they bad. All of that which was dear and precious to man, leaves him and turns from him. Only his works, to the very last one, accompany him. He, who has a mind to understand, let him understand.

To contemplate the resurrected Lord Jesus:

1. How according to the testimony of St. Paul He appeared alive to five hundred people at once; "After that, He appeared to more than five hundred brothers at once, most of whom are still living, though some have fallen asleep " (1 Corinthians 15:6);

3. How at the time of the Apostle Paul, there were still living many outside the circle of the apostles, who had seen Him.

About sobering up from sin

Why does the apostle place our sobriety on the dependence of the resurrection of the Lord? Because the resurrection of Christ from the dead is the main rebuttal to sinning. And, because nothing else in this world can turn us away from sinning as the knowledge that the Lord resurrected from the grave and now, sits alive on the Throne of Glory and is awaiting us on His judgment. Sinning, after that knowledge, is completely absurd. Sobering up from sinning, after that knowledge, is perfectly natural and reasonable.

"Become sober as your ought!" Not half-heartedly, but completely. Dismiss from your minds even the remembrance of sin. For sin is like a plant which can grow even in the most parched places. One drop of moisture and, seemingly, a withered plant becomes green. One remembrance of a seemingly long forgotten dead sin makes it come alive and causes it to become stronger.

The heathens and sinners, who did not have the example of the resurrection of the dead and are sinning, will have some kind of justification at the Judgment. They will say: "There was nothing so powerful that could have sobered us up from sinning. We believed that the grave was the last delta of the river of human life, for we did not have any proof of life after death." Thus, will the heathens speak? But, how will you Christians justify yourselves, you who learned of the resurrection of Christ and have not sobered up; you who have heard so many testimonies of the resurrection and the judgment and yet you continue to sin? How are you going to justify yourselves?

My brethren, sober up for once as you should and do not sin for Christ is risen from the grave. O resurrected and living Lord, help us to sober up from sin once and for all.

To You be glory and thanks always. Amen. 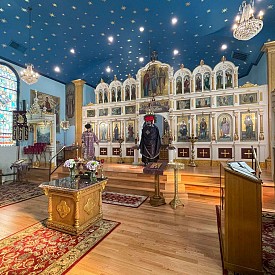 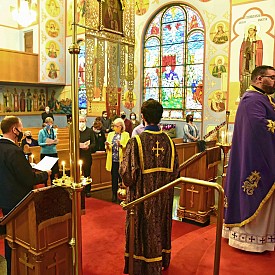