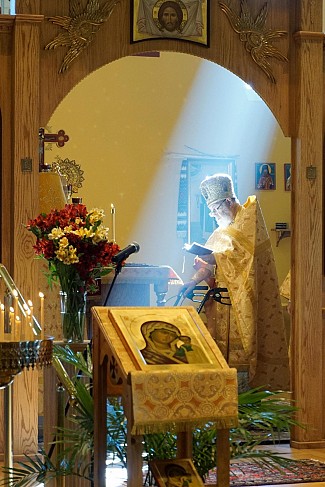 On Friday, September 24, Archpriest Nicholas Molodyko-Harris presided at the celebration of the Divine Liturgy for the feast of the Synaxis of Saints of Alaska at Holy Apostles. Of additional significance, on this day sixty years ago, Father Nicholas was ordained into the Priesthood. With the blessing of His Beatitude Metropolitan Tikhon and His Eminence Archbishop Mark, Archpriest Alexander Rentel, Chancellor of the Orthodox Church in America, concelebrated the Liturgy. Also concelebrating were Father Nicholas’ sons-in-law, Archpriest Timothy Hojnicki, parish rector, and Archpriest David Cowan, as well as Stavrophor Iliya Balach, and Archpriest Stephen Vernak. Father Alexander conveyed to Father Nicholas the greetings of His Beatitude and also his appreciation for Father Nicholas’ many years of service to the Orthodox Church in America. Alter servers included Father Nicholas’ grandsons, Nicholas, Elijah, and Joachim Hojnicki and Gabriel Cowan. Also present were Father Nicholas’s Matushka of sixty years, Anastasia, and their Best Man and Matron of Honor, Stephen and Margaret Pron, as well as their daughters, Matushkas Anastasia Hojnicki and Tamara Cowan; granddaughter, Kyra Hojnicki; and many friends and parishioners. Father Nicholas was presented with gifts from his family and the parish of Holy Apostles to mark the momentous occasion, including a new (matching!) set of gold vestments, a pectoral cross, and a palitza, which were blessed at Great Vespers Saturday evening and which he wore the following day during Divine Liturgy on the Sunday of the Repose of The Holy Apostle John the Theologian.

Congratulations to Father Nicholas! May God bless him and grant him many years! 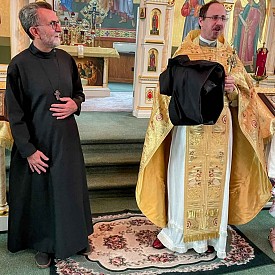 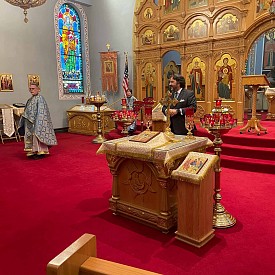